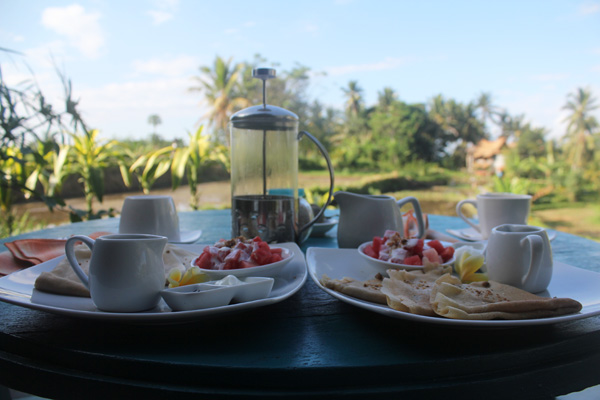 Are we on day 3 already? I almost want to prolong these posts as long as possible so I can pretend that my trip never really ended… This day was far more chilled than the previous two, as we took the time to appreciate the beautiful cottage we were staying in, having time to recuperate before heading back to Ubud.
Our accommodation was described as a ‘Bamboo Eco Cottage’, set in the middle of rice fields. There was only one other house near us – the one you can see in the pictures – which was another Airbnb accommodation. During the day, there were a few rice farmers in the fields, but apart from that we were in complete solitude. There were no doors or windows as such, just a couple of archways on either side. We may not have been too comfortable leaving our bags there, but as we were only there one night, we were able to stay with them the entire time. The bathroom facilities were surprisingly really great; the outdoor (walled) shower was a really amazing experience, and a great way to wake up in the morning. This cottage was a perfect way to experience the outdoors without physically camping – it is something I will never forget. Waking up and opening the curtains to that view instilled a feeling in me that I can’t quite describe; it was a little piece of paradise.
We started the day with our complimentary breakfast being delivered to the cottage, which we ate cross legged on the patio, taking in the serene surroundings. We were treated with banana pancakes, fresh fruit, tea and coffee. Another decision I am so glad we made was booking an appointment with the in house masseuse that morning. We both had a full body massage that lasted about 45 minutes which was really relaxing and re-energizing. 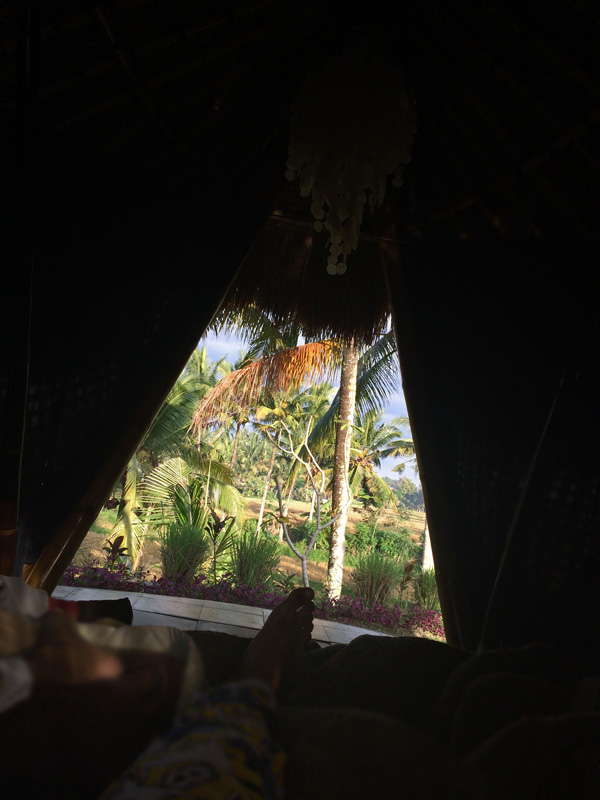 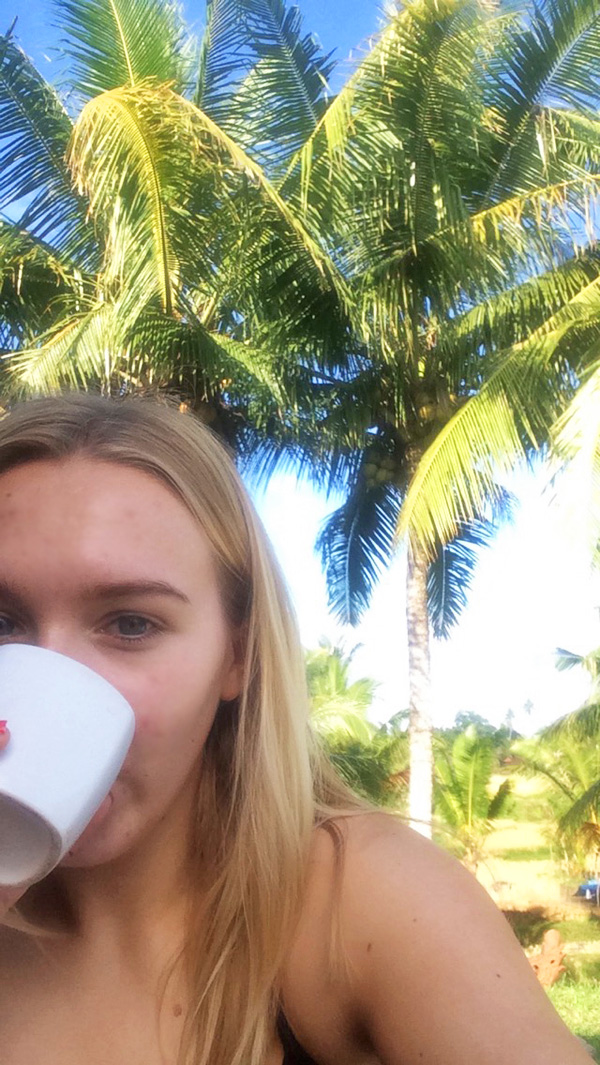 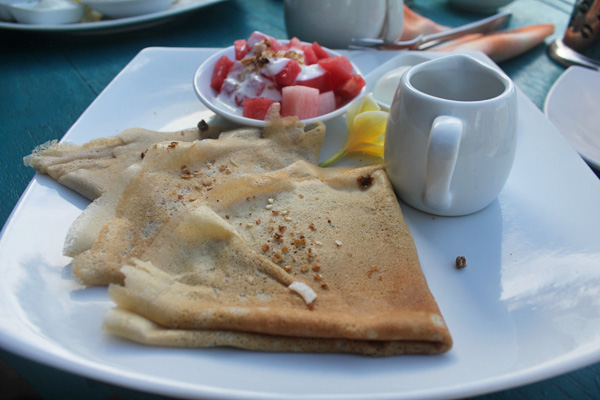 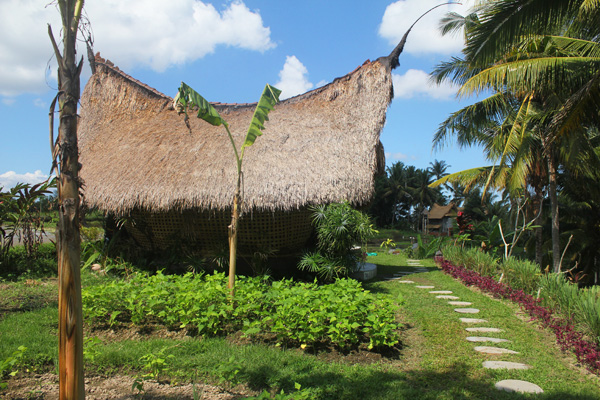 After a very difficult parting with our beloved cottage, we made our way back into central Ubud for our final stop in this area. We found an amazing place that was tucked away off the busy Monkey Forest Road, which was the perfect central location without even feeling like you were even near it. The selling point for us was definitely the bathroom; our room was described as the ‘Waterfall Room’, which had a stunning waterfall equipped with a pond full of fish in the bathroom – unbelievable. Our host was also incredible and gave us more recommendations that we could have even fitted into our trip. 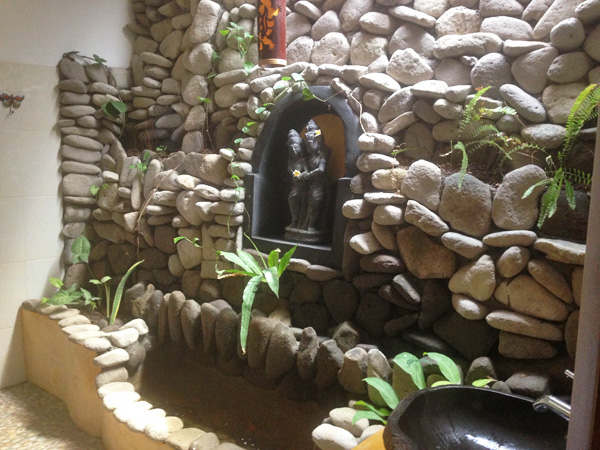 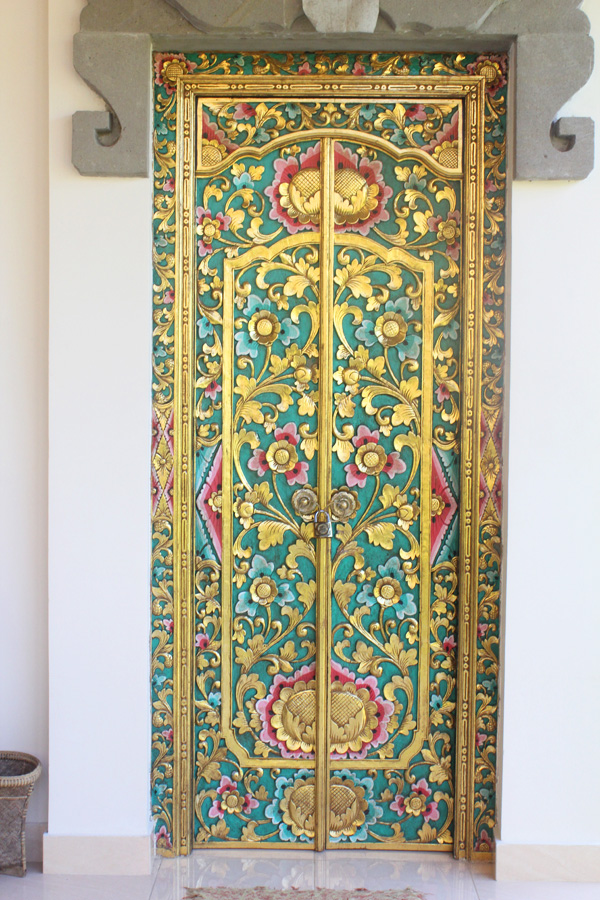 By this point we had definitely worked up an appetite, so we decided to head to a place that was highly recommended online – Bebek Bengil. In English this translates as ‘dirty duck’, and it claims to be the creators of the ‘original’ crispy duck. This restaurant was huge beyond belief and the gardens were so beautiful. Unfortunately I haven’t included a picture of the food, because even though it was delicious, it didn’t look the most appetising, and I want to save the disgust for any veggies out there! 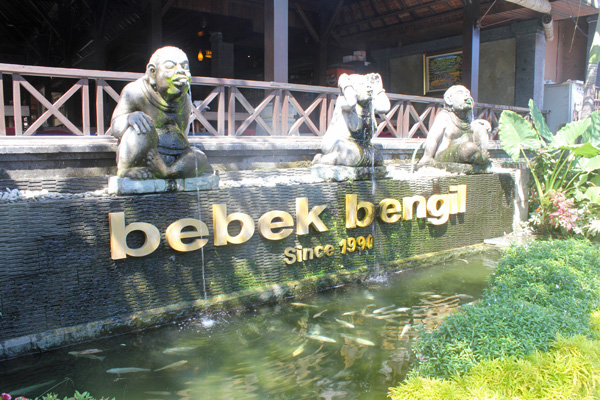 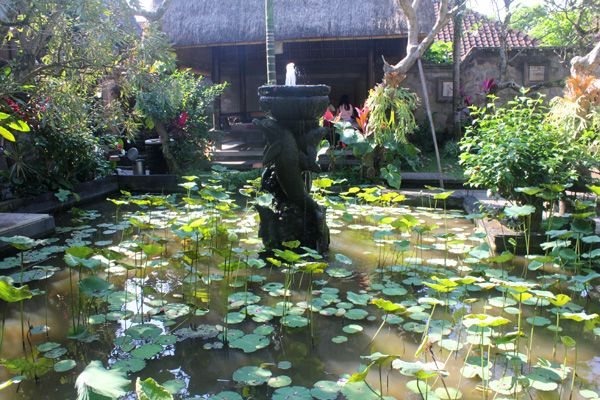 Next stop was one of our most anticipated on the trip, the ever famous Monkey Forest. It is essentially a sanctuary that is home to many macaques, where tourists can visit and feed them in their natural habitat. It definitely feels less cruel than a zoo, and it is amazing to see animals roaming in their natural habitat. Feeding them, however, can be a little terrifying – you have to hold a banana above your head and they even jump up to grab it or climb on to your shoulder and stay whilst they enjoy their food. It is a cool experience, but it made me concerned that perhaps they were only fed in this way so that they would jump on tourists? We had some laughs, regardless. 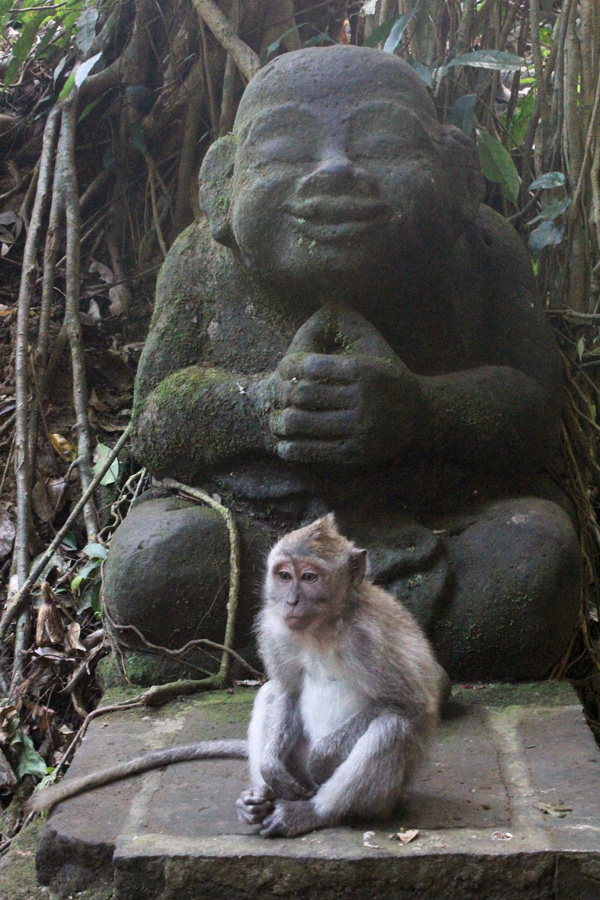 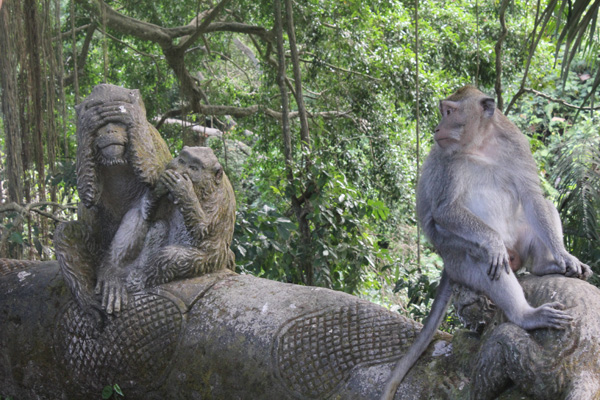 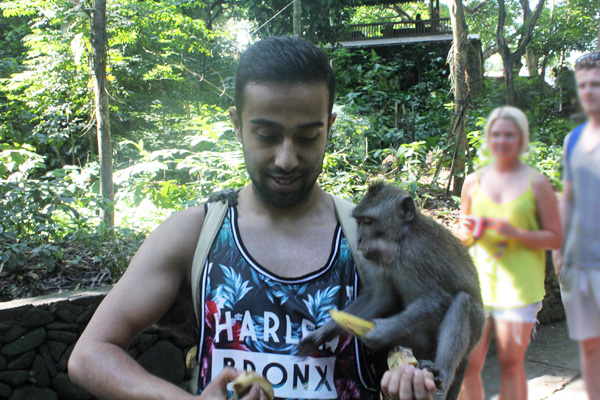 We decided to have a refuel in a cafe we had walked past on the way to monkey forest called Tropical View Cafe. I had a slice of banana cake and a frozen pineapple daiquiri which were both delicious. 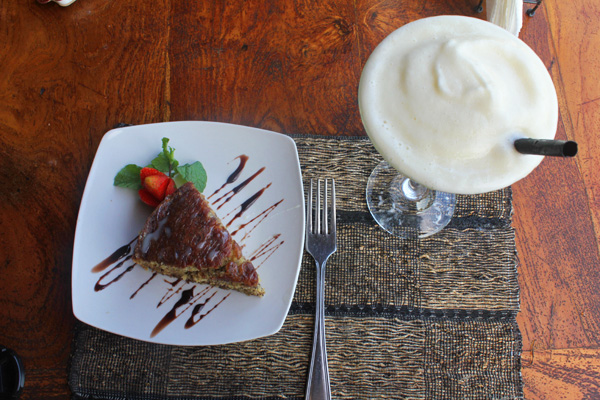 It was then time to get ready for the evening, and we decided to watch another traditional Balinese dance, but this time chose to see a Kecak Fire and Trance Dance in central Ubud. On entering, a flower was placed behind our ear which was a really special touch to our evening. What was incredible about this dance was that the men on stage were chanting throughout the entire duration of the dance which was spellbinding. The highlight of the dance was when the lead man ran through ashes and kicked them up with his bare feet of which were coal black by the end of the performance! 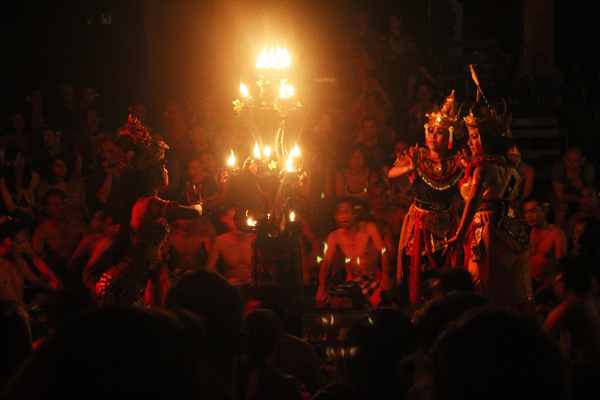 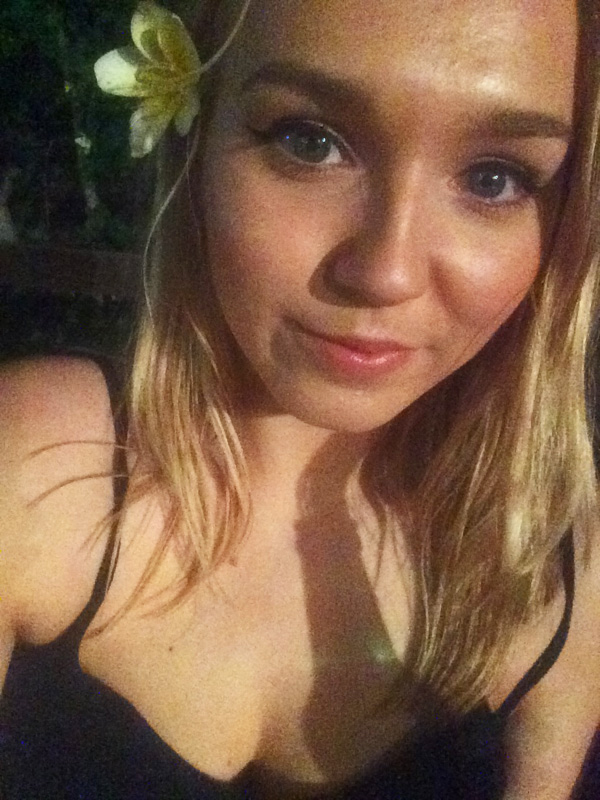 Dinner was a little bit of a disaster. We headed to the highly recommended Naughty Nuri’s – an out of town highly coveted BBQ restaurant which is very small but is known for its incredible ribs. Unfortunately when we arrived, and it was quite late, they had run out of ribs so we had to have chicken instead. It was tasty, but I think the fact that it wasn’t the ribs that we had been excited about all day made us enjoy it a little less. We we incredibly lucky to be served – two couples came after us who were turned away as they had completely run out of food! To top off the disastrous start, then was then a power cut and we were somewhat rushed, in candlelight, to wolf down our dinner. Although we were disappointed in our experience, we could definitely tell that the ribs would have been amazing, and if you ever get a chance to visit, make sure you get their early!
This day ended up being a day of polar opposites; from being completely pampered and waking up in absolute paradise to our disappointing and dimly lit dinner. After an admittedly small sulk, we brushed it off as soon as we returned to our beautiful room and remembered how lucky we were to even be on this beautiful island.
–RachelElizabeth
0
SHARES
ShareTweet